The long-term goals of the Pediatric Translational Research laboratory are to understand cellular and molecular mechanisms underlying the pathogenesis of spondyloarthritis. Spondyloarthritis refers to a spectrum of chronic immune-mediated inflammatory diseases that affect an estimated 1% of the population. They differ from other types of inflammatory arthritis in genetic predisposition, pathogenesis, and long-term outcome. Spondyloarthritis often begins as an undifferentiated disease that, in many cases, progresses to ankylosing spondylitis (AS). AS can lead to ankylosis of the spine and significant disability. Although most people affected by AS are adults, approximately 15-20% are first affected as children. This juvenile onset AS (JAS) differs from adult onset disease because spinal (axial) symptoms are usually missing, while peripheral arthritis and enthesitis are more prominent. Most spondyloarthritis in children is classified as a form of juvenile idiopathic arthritis known as enthesitis-related arthritis (ERA) or psoriatic arthritis (PsA). However, children with ERA or PsA and spinal involvement are not distinguished from those with only peripheral arthritis and enthesitis. Since individuals with axial involvement are most likely to progress to AS, recognizing early spinal involvement in children is paramount.

The development of AS is primarily determined by one’s genetic make-up. HLA-B (predominantly the B27 allele) plays a major role, accounting for an estimated 30-40% of overall susceptibility, with additional genes, such as ERAP1, IL23R, IL1RII, IL1 (probably IL1A), CARD9, TNFR1, TRADD, STAT3, PTGER2, ANTXR2 and others also contributing. Our knowledge of how these genes and their variants work together to promote the inflammation and bone formation that occurs in AS is incomplete, although new targets have been identified. As therapeutic options improve, identification of children with spondyloarthritis who have axial involvement will be increasingly important, as they may benefit the most from early aggressive intervention.

These studies will inform us on mechanisms that drive pathogenesis of spondyloarthritis and suggest novel strategies that can be developed to more effectively treat disease. 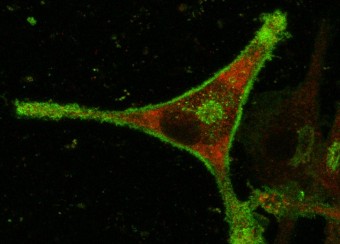 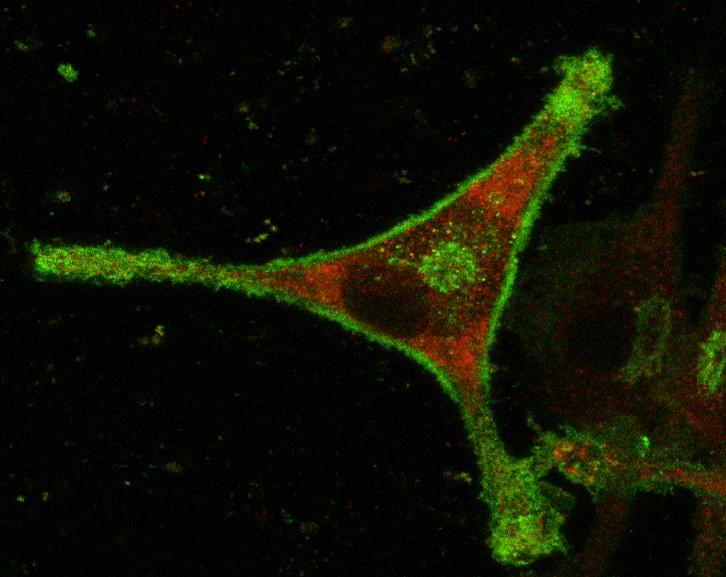 Rat macrophage expressing HLA-B27. Correctly folded HLA-B27 (green) is assembled in the endoplasmic reticulum (ER) and transported through the golgi to the cell surface. Misfolded HLA-B27 (red) is accumulating in the ER causing an ER stress. Image taken by Fatemeh Navid. 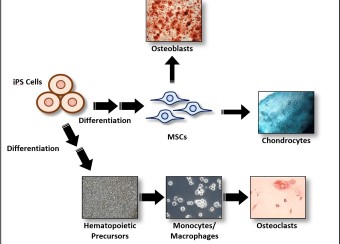 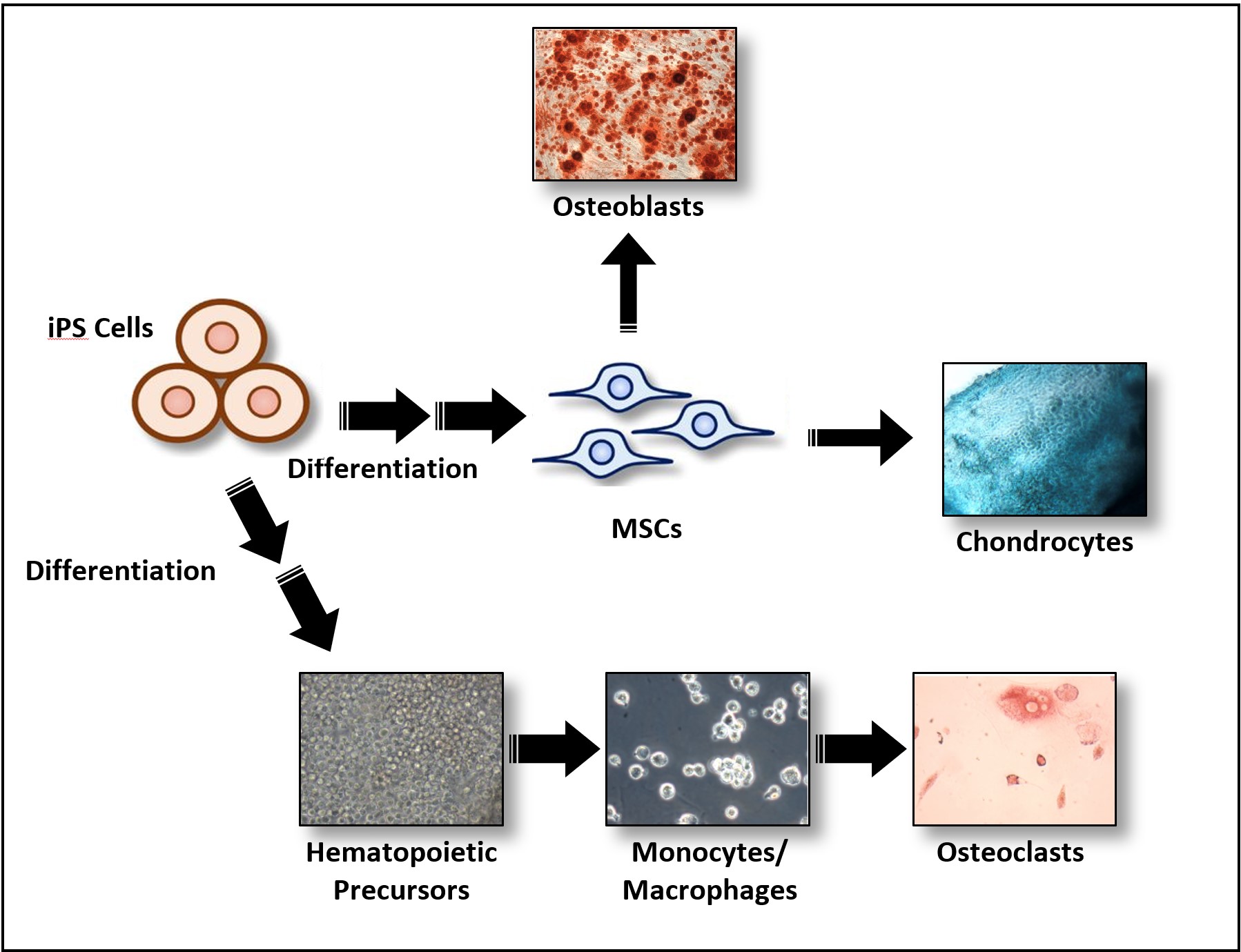 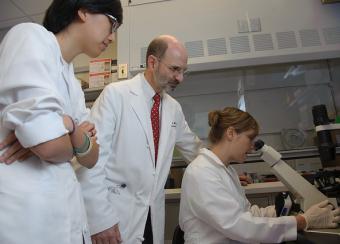 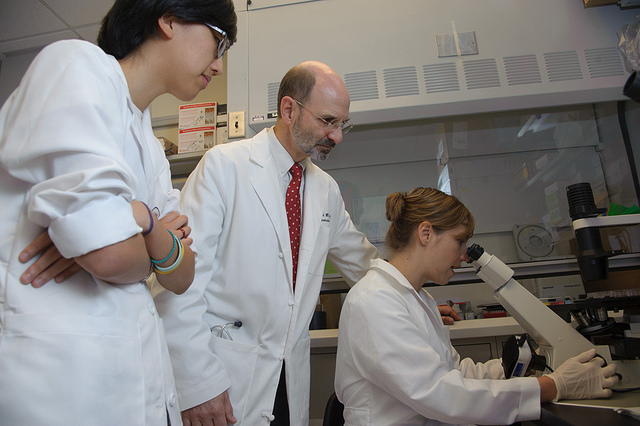 Robert Colbert, M.D., Ph.D., Chief, NIAMS Pediatric Translational Research Branch (PTRB). Dr. Robert Colbert trains Dr. Amy Petrik (Post-Doctoral Student) and Dr. Grace Kwon (Post-Doctoral Student) in the lab. They are examining skin fibroblasts under a microscope. Skin fibroblasts are reprogrammed into induced pluripotent stem cells (iPSC), which can then be differentiated into bone forming cells. These are used to study how specific genetic variants associated with susceptibility to ankylosing spondylitis, help cause spinal ankylosis. The PTRB researches spondyloarthritis and related disorders—including ankylosing spondylitis—particularly with childhood onset. Dr. Robert Colbert is developing a research program to characterize the mechanisms responsible for initiating and promoting inflammation and dysregulated bone formation in these disorders. These studies will build on recent advances in our understanding of the genetics of ankylosing spondylitis, including the role of the immune system in mediating inflammation. 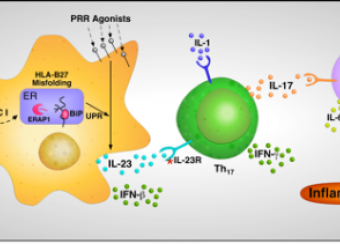 Paradoxical Effects of Endoplasmic Reticulum Aminopeptidase 1 Deficiency on HLA-B27 and Its Role as an Epistatic Modifier in Experimental Spondyloarthritis.