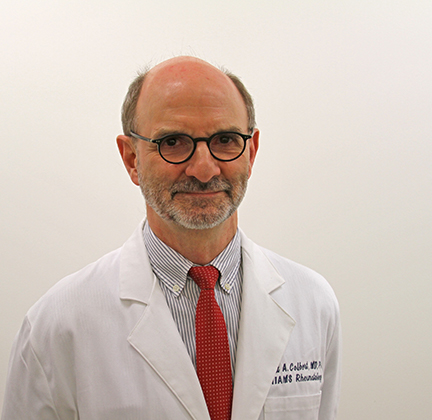 "What excites me about the NIAMS Clinical Research Program director position is the opportunity we have to make an impact," Colbert explained. "We have a number of research programs that are making new discoveries that reveal how diseases develop and evolve and are translating these discoveries into treatments for our patients."

Robert H. Carter, M.D., acting director at NIAMS, praised Colbert's role as a researcher and as a leader.

"Bob has handled some difficult issues with his usual calm and thoughtful manner. His efforts have been greatly appreciated," Carter noted.

Colbert has focused his research on the role of genetic factors in the pathogenesis of ankylosing spondylitis. He was inspired to pursue these interests after meeting a patient with the condition as a medical student at the University of Rochester.

Colbert's laboratory at Cincinnati Children's Hospital discovered misfolding properties of HLA-B that have been linked to the pathogenesis of spondyloarthritis.

Colbert started at NIAMS as a senior investigator and launched the Pediatric Translational Research Branch (PTRB). He is currently chief of the PTRB as well as the Pediatric Clinical Trials Unit. Colbert helped establish a joint rheumatology fellowship program between the NIAMS and the Children's National Medical Center, in Washington, D.C.

He trained in clinical and postdoctoral research in rheumatology at the University of North Carolina at Chapel Hill, and Duke University in Durham, N.C. Colbert earned his M.D. and Ph.D. in biophysics from the University of Rochester School of Medicine and trained in pediatrics at Strong Memorial Hospital, Rochester, N.Y. He has over 100 peer-reviewed publications and has authored several book chapters.

Colbert explained that he is excited about the future of the NIAMS Clinical Research Program.

"We have a treasure trove of genetic discoveries and new ones on the horizon that hold the secret to why our patients develop their immune and inflammatory diseases and will eventually provide opportunities to better treat these disorders," he said.