The decision to fund or not to fund a particular application is based on the assessment of scientific merit by a peer review group and on the relevance of the proposed work to the Institute's scientific and health priorities. Peer reviewers' judgments of scientific merit are expressed in "priority scores" and in percentile rankings derived from these priority scores. At any point in a given fiscal year, budgetary projections are based on awarding funds to applications with rankings better than a certain percentile, sometimes referred to as the "payline." However, applications that address subjects of particular relevance to the Institute's scientific and health priorities may be considered for awards even if their assigned scores and percentile rankings would not qualify for funding under the current payline. Normally, a small portion of each year's budget is reserved for such "discretionary" or "select pay" awards. Projects to be funded on this basis are recommended by Institute staff and/or Advisory Council members. Applicants may not apply for select pay consideration. Final decisions are made by the Director, NIAMS, following staff discussion. 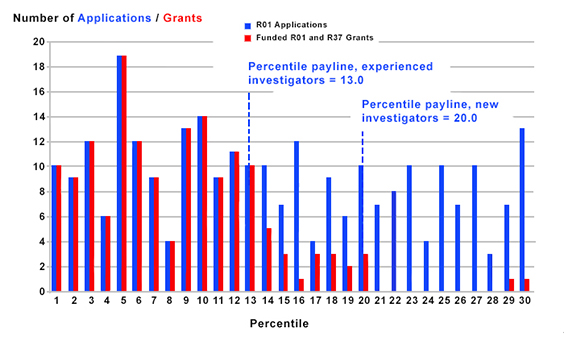 The pattern is similar when applications from experienced and from new and early-stage investigators are analyzed separately (Figures 2 and 3).