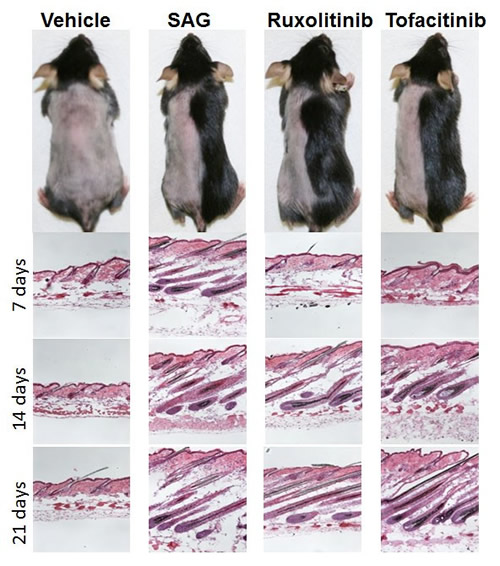 Shaved mice in the resting stage of the hair cycle were either left untreated or treated daily with topical drugs to stimulate hair growth. This image is from the third week of treatment. Photo courtesy of Angela Christiano, Ph.D., of Columbia University.

Two drugs—one used to treat rheumatoid arthritis and another for different types of blood cancers—have shown promise in reversing hair loss characteristic of alopecia areata and related disorders, according to a study in mice funded in part by the NIH’s National Institute of Arthritis and Musculoskeletal and Skin Diseases (NIAMS). The study was published in Science Advances.

Alopecia areata is an autoimmune disease in which the immune system, designed to protect the body from foreign invaders such as viruses and bacteria, mistakenly attacks hair follicles, leading to hair loss on the scalp and elsewhere. There is neither a cure for alopecia areata nor drugs approved for its treatment, though some steroid-based medications may help promote new hair growth without treating the underlying disease.

Previous research led by Angela Christiano, Ph.D., of Columbia University, tested the effects of tofacitinib and ruxolitinib on hair regrowth in a mouse model of alopecia areata. Tofacitinib and ruxolitinib inhibit the Janus kinase–signal transducer and activator of transcription (JAK-STAT) pathway, which classifies them as JAK inhibitors. The researchers found these drugs promoted rapid hair regrowth in both mice and humans with alopecia areata when given orally. Even more robust hair growth resulted when the drugs were applied topically to the mice, suggesting an effect on the hair follicle itself.

"The results of our previous study were intriguing and unexpected," said Dr. Christiano. "We knew the drugs could stop the autoimmune reaction that caused the hair loss, but we wanted to further investigate how the drugs affected the hair follicle directly."

In this new study, Christiano and colleagues shaved the backs of mice with normal hair follicles that were in the resting stage of the hair cycle. Mice were then treated topically on one side daily with either an inactive substance, a sonic hedgehog agonist (a compound already known to stimulate hair growth), tofacitinib, or ruxolitinib. The researchers found the JAK inhibitors accelerated the hair cycle similarly to the sonic hedgehog agonist. In fact, approximately 90 percent of mice treated with the JAK inhibitors for five days showed growth within 10 days of starting treatment. No hair growth was evident in the mice treated with the inactive substance.

The experiment was later extended by Christiano and colleagues to examine the effects of JAK inhibition on hair growth in human tissues. Researchers grafted human scalp skin onto mice, followed by six weeks of recovery. Similar to before, JAK inhibitor treatments were then applied topically to the grafts to examine density of hair follicle growth. Ultimately, the JAK inhibitors significantly increased growth and length of hair shafts within days of treatment.

"Hair loss associated with alopecia areata can have significant psychosocial effects on an individual, and we have had few real treatments for the disease. Being able to use existing drugs for this purpose is a promising treatment approach," said Christiano. More studies are underway to determine how the compounds affect follicles damaged by alopecia areata and other disorders.