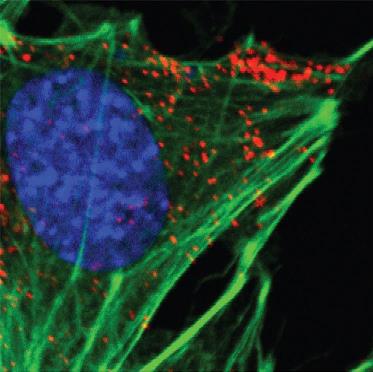 Researchers funded in part by the NIH’s National Institute of Arthritis and Musculoskeletal and Skin Diseases (NIAMS) have discovered a form of the thyroid hormone receptor that accounts for some of thyroid hormone’s effects, including its role in bone development and maintenance. A chemical compound that mimics activation of the newly identified receptor promoted bone formation in mice, suggesting a new therapeutic strategy for enhancing bone health. The study was published in the journal Science Signaling.

Thyroid hormone affects a wide range of bodily functions, such as metabolism, cellular development, and bone health. The hormone mediates many of these processes by binding to a receptor in the cell’s nucleus and triggering gene activation.

The nuclear thyroid hormone receptor is the most studied, but scientists have known that the hormone works through another rapid pathway that does not involve gene activation. They suspected that this other pathway works through a different receptor, but no one had identified it.

Renate Pilz, M.D., of the University of California, San Diego, set out to uncover the elusive alternative receptor. She and her team noticed that, in addition to the nuclear thyroid hormone receptor, cells also made smaller versions of the same molecule. They believed that one of these molecules could be the variant they were looking for.

Dr. Pilz’s team focused on one of these smaller versions, p30 TRα1, because it can mediate thyroid hormone’s rapid effect on cells and is present on bone cell membranes. Earlier experiments had shown that thyroid hormone adheres tightly to cellular membranes, suggesting that the variant receptor would be localized there.

To examine p30 TRα1’s role in bone formation, Pilz’s team treated osteoblasts, a type of cell that builds and maintains bone, with thyroid hormone. The osteoblasts had been engineered to produce the p30 TRα1 variant alone, so any effects they observed would be attributable to this variant of the thyroid hormone receptor and not the nuclear form.

They found that thyroid hormone triggers the activation of a process that ultimately leads to the cells’ growth, proliferation and survival. They concluded that thyroid hormone, by acting on p30 TRα1, helps promote bone formation by stimulating the production of bone-forming cells and protecting them from cell death.

These results suggested that if scientists could develop a way to activate the p30 TRα1 pathway, they might be able to promote bone formation in people with low bone densities, such as some postmenopausal women or people with certain diseases or taking certain medicines.

To test this possibility, the researchers treated mice with weak bones due to thyroid hormone deficiency with a chemical compound that activates one of the p30 TRα1 pathway’s downstream components. The mice boosted their production of osteoblasts and began forming new bone, suggesting that focusing on the p30 TRα1 pathway could be an effective therapeutic strategy.

“Our results provide a clear rationale for targeting the p30 TRα1 pathway as a viable strategy in developing novel therapeutics for osteoporosis,” said Dr. Pilz. “Millions of Americans are at increased risk for bone fractures because of this serious condition, and we clearly need new ways to treat it.”