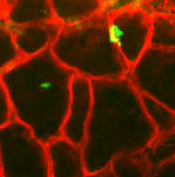 A new study in mice, funded in part by the NIH’s National Institute of Arthritis and Musculoskeletal and Skin Diseases (NIAMS), has shown that stem cells in the muscles lining the roof of the mouth and throat behave differently than those in other parts of the body, and are distinct at the molecular level. The findings, which appeared in the journal Stem Cells, suggest that changes to these cells contribute to swallowing problems associated with certain muscular dystrophies and aging.

Increasing evidence suggests that impairment of skeletal muscle repair may be involved in some types of muscular dystrophy. The repair process depends on stem cells called satellite cells, which serve as a reserve population of cells that are able to multiply and give rise to new muscle in response to injury. Proliferating satellite cells fuse with one another or with existing muscle to form muscle fibers, which are long cylindrical cells with many nuclei.

To gain a better understanding of the role played by satellite cells in muscular dystrophies and swallowing disorders, a team led by Grace Pavlath, Ph.D., professor of pharmacology at the Emory University School of Medicine, examined the biological and molecular properties of the cells and their role in maintaining pharyngeal muscles.

Earlier work had shown that satellite cells from hindlimb muscle taken from mice alternate between active growth, when muscles expand or need repair, and a resting state. In contrast, Dr. Pavlath’s team found that pharyngeal satellite cells (PSCs) continually proliferate and add to existing muscle, even in the absence of an obvious muscle injury. But rather than seeing an increase in the number of nuclei per pharyngeal muscle fiber over time, the numbers were roughly the same in mice of different ages. This suggested that the addition of new nuclei to muscle fibers by multiplying PSCs is offset by some form of continual nuclear loss.

To further explore the idea of continuous turnover in pharyngeal muscles, the researchers next destroyed PSCs in laboratory mice—they suspected that without a reserve of stem cells to draw upon, muscle loss would occur. The results confirmed their predictions. After four months, there were significantly fewer nuclei per muscle fiber in the nasal area compared to control mice, and the muscles began to show signs of atrophy.

To investigate how pharyngeal and hindlimb muscle satellite cells differ at the molecular level, the scientists next compared the cells’ gene expression—or gene activity—profiles. They found differences in 964 genes—478 were more highly expressed in PSCs, while 486 were more highly expressed in hindlimb satellite cells. Notably, genes involved in signaling and cell growth were among the genes that were more active in PSCs.

These results revealed a distinct molecular profile for PSCs, which likely underlies the cells’ unusual pattern of continual proliferation and contribution to maintaining the size of pharyngeal muscle fibers.

Together, the findings show that pharyngeal muscles depend on a set of active satellite cells for their maintenance. The results also suggest that problems with PSCs could lead to muscle atrophy and contribute to swallowing disorders associated with certain dystrophies and aging.

"Swallowing disorders can seriously impact health by leading to poor nutrition and increasing the risk of aspiration and pneumonia," said Dr. Pavlath. "Our work, by uncovering a key role played by satellite cells in maintaining pharyngeal muscles, may lead to interventions that help preserve muscle function and the ability to swallow."

This work was supported by the NIH’s NIAMS (grant R01-AR061987) and National Institute on Deafness and Other Communication Disorders (grant F31-DC012225).