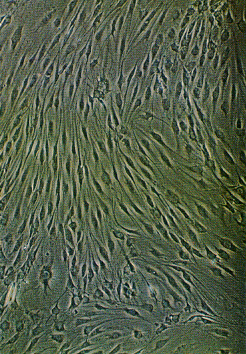 A new study, funded in part by the NIH’s National Institute of Arthritis and Musculoskeletal and Skin Diseases (NIAMS), has uncovered differences in key cellular processes between knee and hip joints of people with rheumatoid arthritis (RA). The findings, which appeared in the journal, Nature Communications, suggest that tailoring RA medications to the affected joints in each individual could improve effectiveness and bring greater relief from symptoms.

RA is an autoimmune disorder in which the immune system, which normally protects the body, mistakenly attacks the joints, causing inflammation and pain. If unchecked, the disease can erode the cartilage and bone in the joint, resulting in reduced mobility and impaired quality of life. There is no cure for RA, but medicines that dampen inflammation help ease the discomfort and reduce joint damage. Joint replacement surgery is also an option in severe cases.

Multiple cell types play a part in joint erosion in RA, including cells called fibroblast-like synoviocytes (FLS). These cells inhabit the joint lining and become particularly aggressive in RA, secreting inflammatory molecules and degradative enzymes. Scientists believe that agents that target these cells have the potential to complement other therapies in treating the disease.

In the current study, a team of researchers from the University of California, San Diego, led by Gary S. Firestein, M.D., and Wei Wang, Ph.D., collaborated with scientists at Janssen Research and Development and the University of Electronic Science and Technology of China to follow up on previous work that showed that FLS in patients with RA differ from those with osteoarthritis (OA), a more common type of arthritis that stems from progressive wear and tear on the joints. The earlier study had revealed differing DNA methylation patterns between OA and RA FLS. Methylation of DNA affects gene activities, suggesting that the cells behave differently in people with OA versus RA.

These findings led the investigators to wonder if differences in FLS might contribute to the variability in susceptibility of different joints to RA. The disease often begins in the hands and wrists, while other parts of the body, like the hips, are not usually affected until later on. In addition, certain hand joints, such as the knuckles, frequently become inflamed, while others, like the finger joints closest to the fingertips, are rarely affected.

To test for joint-to-joint differences in OA and RA FLS, the researchers compared the DNA methylation patterns of cells taken from patients who had undergone knee or hip replacement surgery. Their analysis revealed significant differences between them, suggesting that FLS exhibit distinct gene activity profiles at these two locations. In some cases, the hip and knee differences were similar in both RA and OA patients. But other differences were only observed in RA patients, suggesting that distinct mechanisms may underlie inflammation of different joints.

Subsequent experiments confirmed this. When the researchers examined the cells’ gene activity patterns using a whole-genome approach, they found significant variation, especially among genes that govern immune function and inflammation. The activity of one of these genes, IL-6, a key mediator of inflammation, was nearly 11-fold higher in hip FLS than knee FLS, suggesting that IL-6-related mechanisms distinguish the disease process at these two locations.

This study has revealed joint-specific differences in RA FLS, which likely influence how each joint is affected by the disease.

"Our experiments show that FLS can behave differently depending on the joint location, which might explain why some highly targeted medicines work better on certain joints than others," said Dr. Firestein. "In the future, we might be able to tailor RA therapies based on the pattern of affected joints in individual patients."

This work was funded in part by the NIH’s NIAMS (R01-AR065466) and National Institute of Allergy and Infectious Diseases (R01-AI070555). The Rheumatology Research Foundation, the Arthritis Foundation and the National Science Foundation also contributed support.