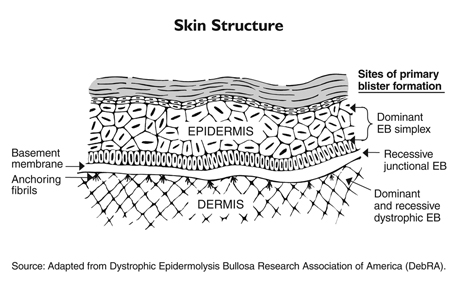 Epidermolysis bullosa occurs when genetic defects result in the skin’s two main layers not adhering properly at the dermal-epidermal junction.

Replacing a protein that is crucial to ensuring that the skin’s epidermis and dermis adhere to one another may be the key to treating a debilitating skin disorder effectively, according to research conducted in mice and funded in part by the NIH’s National Institute of Arthritis and Musculoskeletal and Skin Diseases. The research was published in Molecular Therapy and the Journal of Investigative Dermatology.

Epidermolysis bullosa (EB) is a family of disorders caused by genetic defects in the structural proteins of the skin, resulting in unusually fragile skin and mucous membranes that break and blister very easily. The wounds are difficult to heal, and when they do, extensive scarring can occur.One particularly severe form of EB known as recessive dystrophic EB (RDEB) occurs when the gene that codes for a protein called Type VII collagen (C7) is defective or missing. Without this protein, the skin’s two main layers do not adhere properly at the dermal-epidermal junction (DEJ) and tend to separate, causing the blisters and risk of infection.

In one study, human rC7 was applied topically to wounds made on the backs of mice that have a normal C7 gene. After two weeks, the researchers found that the rC7 had incorporated stably into the DEJ and accelerated the healing process. The effect persisted for two months. In addition, the wounds of mice that were treated with human rC7 healed with less scarring than those in untreated mice.

The researchers then grafted RDEB skin onto the backs of mice engineered to not reject the graft. Next, they made wounds in some areas of the grafted skin, and applied rC7 to both broken and intact skin. The researchers found that the rC7 incorporated into the DEJ where the skin was injured, but not where the skin was intact, suggesting that the topical agent can effectively heal existing wounds, but it cannot penetrate unbroken skin and prevent blisters from forming.

In another study, the researchers made skin wounds on the backs of normal mice, and then intravenously administered human rC7 to these mice through their tail veins. They found that the intravenous rC7 migrated to the wound sites, correctly incorporated into the DEJ of the healed lesions, and even accelerated healing. No human rC7 was found in unbroken skin or any internal organs, indicating that the molecule is stable and migrated exclusively to skin injuries.

The investigators then evaluated intravenous administration of rC7 in RDEB mouse models by grafting RDEB skin onto the backs of mice engineered to not reject the graft. They then injected human rC7 into the tail veins of these mice, and found that the rC7 migrated to the RDEB skin grafts, incorporated into the DEJ of the grafted skin, and created new anchoring fibril structures, which hold the epidermis and dermis together. The epidermis and dermis of the rC7-treated skin also appeared normal.

"Intravenous delivery of rC7 opens up new prospects for more systemic treatment of the disease," said Drs. Woodley and Chen. "Our data suggest that intravenous rC7 not only improves the healing of multiple RDEB-related wounds simultaneously, but it can also prevent new blisters from developing in RDEB skin."

On the other hand, topical delivery of the protein is a simpler method and would not require special equipment or sophisticated medical expertise to administer. It also may require a lower dose than is likely necessary for intravenous delivery, the researchers note.

Overall, both methods represent promising new strategies for treating patients with RDEB. But some questions remain before it can be tested in humans. "We need a better understanding of how C7 migrates and diffuses, and how it binds with the DEJ," cautions Dr. Chen. "We also need additional research to confirm the safety of the treatment."

In addition, further studies will determine the duration of a single dose, and how frequently treatment may need to be administered. Moreover, because repeated administration of the protein could lead to immune rejection in some people, special considerations must be made to ensure patients are able to tolerate it.