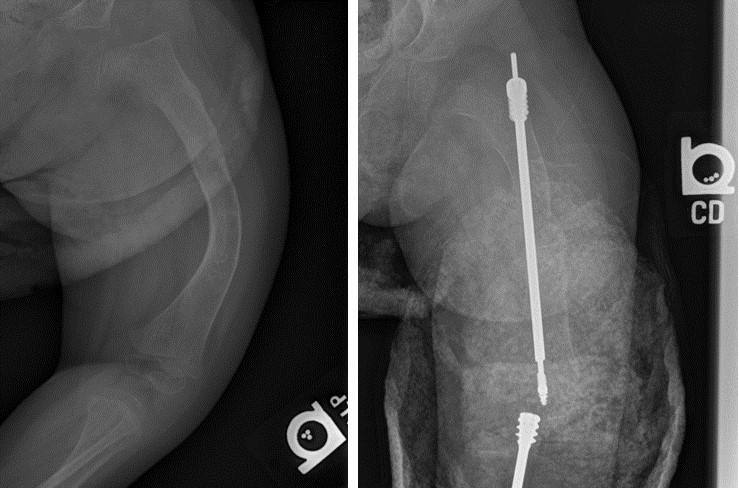 Typical bowed femur from an OI patient (left), which is often corrected by inserting a surgical rod (right).
Credit Michelle Caird, M.D., of the University of Michigan.

An antibody that has been tested as a treatment for osteoporosis may also boost long bone strength in osteogenesis imperfecta (OI), according to a study funded by the NIH’s National Institute of Arthritis and Musculoskeletal and Skin Diseases and conducted in mice. The study was published in the journal Bone.

OI, also known as brittle bone disease, causes weak bones that are prone to fracture, especially in childhood. The forms of OI vary in severity, and are commonly caused by mutations in genes that code for collagen, the protein that forms the framework of bone. OI is a lifelong condition that has no cure. The use of bisphosphonates to reduce OI-associated fracture risk has shown some promise, but the effect of these drugs on long bone strength remains unclear. In other OI research, growth hormone has been tested as a way to increase bone strength, but these studies have shown mixed results across OI types.

Previous research has suggested that, in addition to producing defective collagen, OI upsets the normal cellular processes of bone formation and breakdown. Researchers wondered if OI cells would respond to a bone formation signal, and whether encouraging new bone formation could result in increased bone mass and strength, even if the disease-causing genetic defect could not be corrected.

In this recent investigation, Ken Kozloff, Ph.D., and Michelle Caird, M.D., of the University of Michigan, and colleagues tested the use of an antibody to sclerostin, a protein that inhibits bone formation. Limiting sclerostin would serve to stimulate the formation and activity of osteoblasts, a type of cell that forms bone.

“We currently lack a therapy that both increases long bone strength and reduces fracture risk in children with OI. An antibody to sclerostin has already shown promise in clinical studies for osteoporosis, effectively increasing bone mass. We wanted to see if the same results would hold true in mouse models of OI, particularly during periods of growth,” said Kozloff.

Rapidly growing young mice carrying an OI-causing collagen mutation were used as a model for human OI type IV, a moderately severe form of the disease. The sclerostin antibody was injected into these mice two times per week, for five weeks. In addition, normal young mice were injected with the antibody at the same rate, and all mice were compared to untreated animals.

At the end of the five-week study, the researchers found increased bone formation in both groups of treated mice. The long bones of the OI mice were strengthened to levels nearly equivalent to the normal mice not given the antibody, and the treated OI mice did not lose any bone mass over the five-week study, either. However, the underlying brittle nature of the bone remained unchanged.

Short stature is also associated with OI. To determine if the sclerostin antibody had any effect on stature, the researchers examined bone lengths by X-ray before and after treatment. They found no effects on long bone length after the treatment, suggesting that the therapy may not impact height in OI patients.

The investigators caution that before considering testing in humans, they will need to examine whether inhibiting sclerostin could lead to skeletal overgrowth in undesired areas, which can happen in people who do not produce enough sclerostin. In addition, because the mice used in this study modeled only one type of OI, these results may not translate to other forms of OI.

“More research is needed to answer some important questions, but the current data suggest this may be a promising candidate treatment for OI,” concluded Kozloff.

This work was supported by NIAMS grant number R01AR062522 to Ken Kozloff.