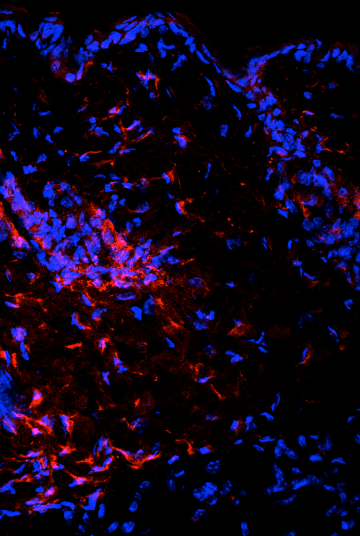 In scleroderma, immune cells invade the skin, but the role this incursion plays in the disease is unclear. Now, scientists will be better able to address the immune system’s role thanks to a new mouse model of scleroderma, which mirrors many aspects of the human disease. Shown here are immune cells (red) in skin from the sclerodermic mice.
Credit Elizabeth Gerber, Johns Hopkins University School of Medicine.

Integrins, a large class of cell surface molecules, play a role in a skin disease called scleroderma, according to research funded in part by the NIH’s National Institute of Arthritis and Musculoskeletal and Skin Diseases and published in the journal Nature. The study showed that targeting integrins in mice with a form of scleroderma reversed the skin abnormalities associated with the disease.

Scleroderma is a potentially life-threatening condition in which previously healthy people develop scarring of the skin, and in some cases damage to blood vessels and internal organs. In most forms of scleroderma, the cause of the disease is unknown, but it has been associated with immune system malfunction.

“Scleroderma is a mysterious disorder,” said senior author Harry C. Dietz, M.D., of the Johns Hopkins University School of Medicine. “While we know a lot about the symptoms and the course of the disease, until now we’ve known very little about what actually causes it.”

The study of scleroderma has been hampered by the lack of an animal model that reproduces the most important aspects of the human disease. To remedy this, Dietz’s team set out to create a mouse model that closely reflects scleroderma in humans.

They looked to a rare genetic form of the disease called stiff skin syndrome, which is caused by defects in a protein called fibrillin-1. Fibrillin-1 is not found inside cells. Instead, it helps form a network of fibers that physically supports cells and tissues.

Dietz’s team introduced a stiff skin syndrome-causing mutation into mice and found that they displayed the same skin abnormalities seen in people. The mice developed thick, scarred skin that contained excessive numbers of immune cells. The similarities with human scleroderma suggested that they could use these mice to advance their research.

“The more common, non-inherited forms of scleroderma are complicated diseases that probably involve multiple genes and environmental factors,” said Elizabeth Gerber, an M.D., Ph.D. student at Johns Hopkins University School of Medicine and first author of the paper. “The great thing about having these mice is that now we can start to uncover these factors, as well as test the effects of experimental medicines on the disease.”

The researchers began by focusing on integrins, molecules that traverse the cell’s membrane and anchor cells to the outer scaffold of fibers. Integrins also relay information from the environment outside the cell to the inside and trigger appropriate responses. They act as signaling molecules and can stimulate many different processes, such as formation of a blood clot to help seal a damaged blood vessel or migration of immune cells toward a site of infection.

The scientists suspected that integrins played a role in stiff skin syndrome because mutations that cause the condition lie in a small region of fibrillin-1 known to bind integrins. Mutations that disrupt this binding would leave cells without a key connection to their surroundings, potentially causing the disease symptoms.

To test the role of integrin binding in scleroderma, the scientists treated the mice engineered to develop stiff skin syndrome with antibodies that bind to key cellular integrins. They reasoned that antibody binding would mimic fibrillin-1 binding, and possibly prevent the disease’s characteristic skin abnormalities.

Following three months of continuous treatment with the antibodies, the stiff skin syndrome mice remained normal, indicating that targeting integrins could be a promising treatment strategy for scleroderma.

The scientists were also curious about the involvement of another signaling molecule called TGF-beta, an immune regulator that had previously been implicated in integrin signaling pathways. TGF-beta was already known to be overly active in people with scleroderma, but scientists didn’t know why or what role it played.

When Dietz’s team suppressed TGF-beta activity in mice who had developed stiff skin syndrome, they found that their skin returned to normal. The results suggest that targeting TGF-beta could be another potential treatment for scleroderma.

From their data, the researchers concluded that integrins, when unable to interact with fibrillin-1 in stiff skin syndrome, respond by stimulating the production of excessive TGF-beta. TGF-beta, in turn, would activate other pathways that cause the abnormalities seen in skin.

This study has uncovered key molecular factors in a form of scleroderma in mice, and tested novel strategies for treating the disease. In addition, the engineered mice represent a valuable new model for scientists to use in gaining further insights into scleroderma and related conditions.

This research was supported by NIH’s National Institute of Arthritis and Musculoskeletal and Skin Diseases (grant numbers R01-AR41135 and P01-AR049698), the Scleroderma Research Foundation, the National Marfan Foundation, the Smilow Center for Marfan Syndrome Research and the Howard Hughes Medical Institute.