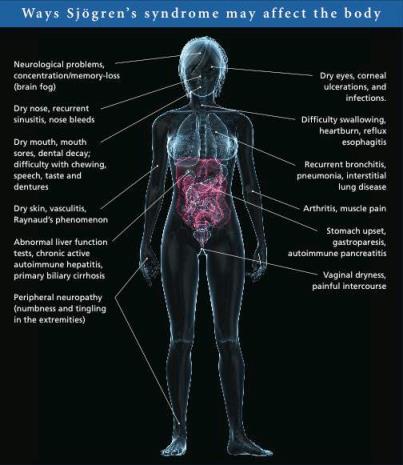 The most common symptoms of Sjögren’s syndrome are dry eyes and mouth, but the disease can affect other tissues and organs as well. Credit: Sjögren’s Syndrome Foundation.

By analyzing the genomes of thousands of people, scientists funded in part by the NIH’s National Institute of Arthritis and Musculoskeletal and Skin Diseases have uncovered several genes associated with an autoimmune disease called Sjögren’s syndrome. The findings, published in the journal Nature Genetics, could help researchers develop new strategies to diagnose and treat the condition.

In Sjögren’s syndrome, the immune system mistakenly attacks and damages the glands that produce tears and saliva. The most common symptoms are dry, itchy eyes and dry mouth with difficulty swallowing and speaking. People with the syndrome can also develop blurry vision, and they are susceptible to tooth decay and infections in the mouth. In some cases, other organs, such as the kidneys, liver and pancreas, are affected as well.

Sjögren’s syndrome is considered one of the more prevalent autoimmune disorders, but many physicians believe the syndrome often goes unrecognized. It is difficult to diagnose because its main characteristics—dry eyes and mouth—are features common to many other conditions. Sjögren’s syndrome affects ten times more women than men, suggesting that hormones may play a role.

The causes of Sjögren’s syndrome are not known, but it is thought to arise from a complex mix of genetic and environmental factors. To gain insight into the syndrome’s genetic underpinnings, Kathy Sivils, Ph.D., of the Oklahoma Medical Research Foundation, set out to identify genes associated with it.

“By analyzing a large collection of DNA samples from people with Sjögren’s, we can identify gene variants that these patients tend to have in common,” said Dr. Sivils. “Then, by studying the roles these genes play, we can begin to understand how they disrupt the immune system and cause the destruction of moisture-producing glands.”

It was challenging to assemble a large enough set of samples to proceed with the study, according to Dr. Sivils. “Sjögren’s syndrome is often mistaken for other disorders, and the tests to definitively diagnose it are not straightforward, making building a substantial collection of patient samples difficult.”

Dr. Sivils overcame this problem by forming a worldwide network of Sjögren’s researchers called the Sjögren’s Genetics Network, or SGENE. Together, the group succeeded in gathering about 2,000 Sjögren’s patient DNA samples. By comparing them to roughly 7,000 DNA samples from healthy volunteers, Dr. Sivils and her colleagues were able to identify six genes associated with the condition.

All of the newly identified genetic risk factors have a role in the immune system, which fits well with the immune dysfunction that characterizes the disease. The six genes that SGENE identified are:

Some of these genes have been linked to other autoimmune diseases as well, suggesting that they play a broader role in disturbing the immune system. For example, IRF5, STAT4, and TNIP1 have all been associated with systemic lupus erythematosus and rheumatoid arthritis, and IRF5 and IL12A are risk factors for a chronic liver disease called primary billiary cirrhosis.

The researchers also confirmed a previously known strong connection between Sjögren’s syndrome and molecules in the “HLA” family, which are crucial for immune function. This study uncovered what seems to be a more extensive involvement of these molecules than was previously known, with multiple HLA genes in different classes conferring risk of the disease.

There is currently no cure for Sjögren’s syndrome, so treatments are aimed at alleviating the symptoms. People with the disease use eye drops to relieve dry, itchy eyes, and mouth preparations that mimic saliva to help with swallowing and speaking.

“The identification of these genetic susceptibility factors opens up new avenues for understanding how the immune system goes awry in Sjögren’s syndrome,” said Dr. Sivils. “The ultimate goal is to use this knowledge to find new ways to diagnose the disease and develop targeted medicines to treat it.”