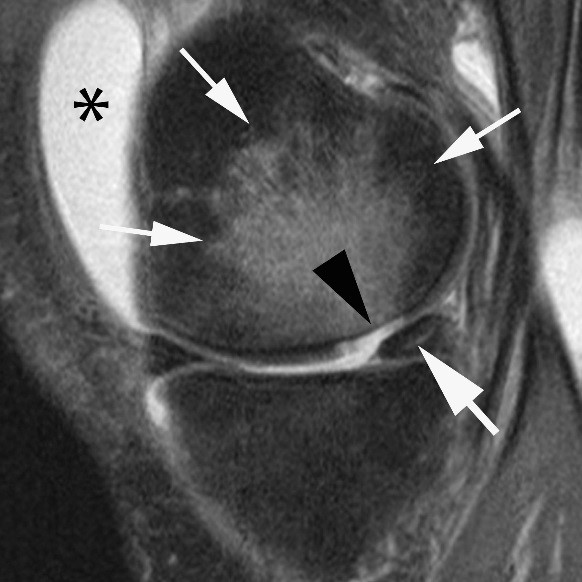 Besides cartilage damage (black arrowhead), other joint tissue changes visible only on MRI, such as a torn meniscus (large arrow), signs of inflammation (asterisk) or bone marrow lesions (small arrows) have been found to be important triggers of knee osteoarthritis. Courtesy of Frank W. Roemer, Boston University School of Medicine and the University of Erlangen -Nuremberg.

Using magnetic resonance imaging (MRI), a team of scientists has detected structural changes in the knee joint that precede signs of osteoarthritis seen on X-rays. The study, which was supported in part by the NIH’s National Institute of Arthritis and Musculoskeletal and Skin Diseases (NIAMS), calls into question the assumption that damage to cartilage is the primary underlying cause of osteoarthritis. The findings appeared in the journal Arthritis and Rheumatology.

Osteoarthritis is a common chronic condition of the joints characterized by breakdown of the cartilage that cushions the ends of the bones, bony changes in the joints, and inflammation of the joint lining. It tends to affect heavily used joints such as those in the hands and spine, and the weight-bearing joints in the knees and hips.

For decades, the prevailing view has been that osteoarthritis stems primarily from wear and tear on the cartilage in the joint. Osteoarthritis is often diagnosed using characteristics visible on X-rays, such as narrowing of the joint space, which occurs as the cartilage breaks down, and development of bone spurs, which can form at the edges of the joint.

But recently, studies using MRI, a technology that enables researchers to visualize all the joint’s tissues, have revealed that changes throughout the joint are associated with osteoarthritis. These findings suggested that factors other than loss of cartilage may contribute to disease onset.

In this study, a team led by Frank W. Roemer, M.D., of the Boston University School of Medicine and the University of Erlangen-Nuremberg, set out to assess if structural features detectable by MRI can predict the changes seen on X-rays. If so, the MRI findings could help identify people at risk of joint degeneration. They may also yield insights into the early stages of the disease and guide research on therapies to slow or stop its onset.

The team used data from the Osteoarthritis Initiative, a nationwide, NIH-supported observational study of knee osteoarthritis occurrence and progression. The initiative included nearly 5,000 participants, ranging in age from 45 to 79 years when they joined the study. MRI and X-ray knee images were taken at the first visit, and again yearly for four years.

The researchers compared the MRI images of 355 "case knees"—knees that developed osteoarthritis within the four-year period, as determined by characteristic signs seen on X-rays–to 355 matched control knees. They found that two years prior to the development of radiographic knee osteoarthritis, the case knees were more likely to have shown signs of inflammation and damage to the medial meniscus, a crescent-shaped segment of cartilage on the inner side of the knee joint.

Inflammation and lesions in the bone marrow of the leg bones that border the joint were the most prominent predictors of the development of radiographic osteoarthritis one year later. Conversely, cartilage damage did not strongly correlate with the occurrence of radiographic knee osteoarthritis one to two years later, suggesting that cartilage breakdown plays a lesser or later role in the development of the disease.

The study also showed that patients with more abnormalities seen by MRI were more likely to develop radiographic osteoarthritis later on. Five or six structural knee anomalies brought a six-fold increased risk of developing the disease two years later, compared to having one or no MRI-observable structural defects.

Together, the findings suggest that cartilage damage may not be central to the development of osteoarthritis. Clinicians should consider a more nuanced view in which multiple factors are at play, setting the stage for the disease many months earlier than previously assumed, according to the researchers.

"For many years, much of the research on therapies for osteoarthritis has focused on preserving the integrity of joint cartilage," said Dr. Roemer. "Our work has provided a more detailed picture of how we view the events leading up to osteoarthritis, and has uncovered risk factors that will help us understand how the disease develops. Hopefully, it will lead to the identification of novel therapeutic targets."