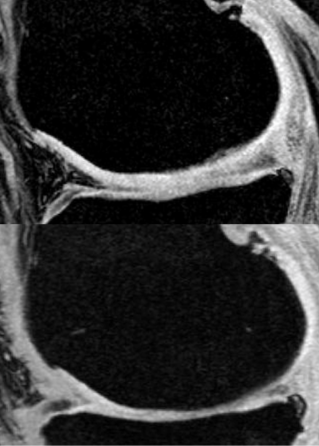 Among people with osteoarthritic knees, repeated steroid injections over two years brought no long-term improvement in reducing pain, according to a study funded in part by the NIH’s National Institute of Arthritis and Musculoskeletal and Skin Diseases (NIAMS). Rather than showing any benefit, the results revealed that the injections sped the loss of the cartilage that cushions the knee joint. The study appeared in the Journal of the American Medical Association (JAMA).

Osteoarthritis (OA) is a common chronic condition of the joints that involves breakdown of the cartilage and the ends of the bones, and inflammation of the joint lining. The disease tends to affect heavily used joints, such as those in the hands and spine, and the weight-bearing joints in the knees and hips. It has been estimated that knee OA affects more than 9 million Americans, and it is a leading cause of disability and medical costs.

Many treatments for OA target inflammation to reduce pain. Direct injection of corticosteroids into the joint is a standard treatment for knee OA. However, the treatment is somewhat controversial with regard to the benefit of both single and repeated injections; evidence that they are beneficial comes from small studies that showed only modest improvements.

To address the procedure’s effectiveness, Timothy E. McAlindon, M.D., M.P.H., of Tufts Medical Center, Boston, led a team of investigators who enrolled 140 patients with symptomatic knee OA and joint inflammation into a 2-year study. The patients, whose average age was 58 years, were divided into two groups and injected with a corticosteroid called triamcinolone or saline every three months.

During quarterly visits, researchers evaluated participants for overall knee pain, stiffness and the impact these symptoms had on their daily activities. They underwent magnetic resonance imaging (MRI) scans each year so investigators could monitor their knee cartilage. The study was a double-blind trial, meaning that neither the investigators nor the patients knew who was in the steroid or saline group.

The results revealed no differences between the two groups in terms of knee pain, function or stiffness at any of the 3-month visits. However, the injections’ short-term impacts were not assessed. Because of the timing for participant visits, these results cannot be compared with studies reporting short-term benefits between one and four weeks following injection.

MRI measurements revealed thinning of knee cartilage in both groups by the end of the study. But loss of cartilage in the steroid group was significantly greater than in controls, with the average change in cartilage thickness being -0.21 mm and -0.10 mm respectively. This more rapid thinning may be due to the known effects of corticosteroids on tissue breakdown. While the faster loss of cartilage in the steroid-treated group did not correlate with more pain over the 2-year period, it may have a long-term negative impact on the health of the joint.

“Use of corticosteroid injections to treat knee OA is based on the medicine’s capacity to reduce inflammation, but corticosteroids have also been reported to have destructive effects on cartilage,” said Dr. McAlindon. “We now know that these injections bring no long-term benefit, and may, in fact, do more harm than good by accelerating damage to the cartilage.”

This study was supported by the NIH’s NIAMS (R01-AR051361) and National Center for Advancing Translational Sciences (UL1-TR001064).