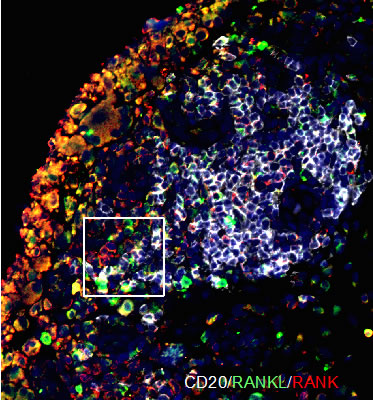 Investigators supported in part by the NIH’s National Institute of Arthritis and Musculoskeletal and Skin Diseases (NIAMS) have uncovered a mechanism by which B cells, the antibody-producing cells of the immune system, contribute to bone degradation in rheumatoid arthritis (RA). The study showed that B cells produce a molecule called RANKL, which stimulates the generation of bone-destroying cells called osteoclasts. The findings, which were reported in Arthritis and Rheumatology, suggest that targeting B cells and the RANKL pathway could be an effective strategy for preserving bone in people with the disease.

RA is an autoimmune disorder in which the immune system, which normally protects the body, mistakenly attacks the joints, creating inflammation and pain. If unchecked, the disease can erode the cartilage and bone in the joint, resulting in reduced mobility and impaired quality of life. There is no cure for RA, but medicines that dampen inflammation help ease the discomfort and reduce joint damage. Joint replacement surgery is also an option in severe cases.

The mechanisms that underlie bone loss in RA are complex. Inflammatory molecules, which bathe the joints of people with the disease, stimulate the production of bone-degrading osteoclasts. In addition, evidence points to an important role for B cells—depleting B cells in RA patients with a drug called rituximab was found to reduce structural damage to the joints and relieve symptoms.

B cells contribute to joint inflammation in RA patients by generating autoantibodies—antibodies that attack the body’s own proteins. However, scientists had noticed little correlation between the levels of these antibodies and severity of symptoms. This suggested that B cells were contributing to the disease in other ways, as well. Understanding the mechanisms involved could help improve clinical care by providing scientists with the foundation for developing new treatments.

To better understand B cells’ role, researchers led by Jennifer H. Anolik, M.D., Ph.D., of the University of Rochester, focused on a signaling molecule called RANKL. Earlier work had shown that RANKL promotes bone degradation by stimulating the production of osteoclasts from immature cells called osteoclast precursors (OCPs). Dr. Anolik’s team wondered if B cells could be contributing to bone damage in RA by generating the molecule.

To test the idea, the scientists examined B cells in blood from RA patients and healthy controls for the presence of RANKL. They found that the cells, especially a subset called memory B cells, produce the molecule. Memory B cells from people with RA produced about twice as much RANKL as those from controls.

Memory B cells help protect people from catching an infectious disease more than once. Upon a second exposure, the cells "remember" the microbe and quickly launch an attack, stopping the infection in its tracks. RA patients have high levels of memory B cells as a result of the autoimmune assault that characterizes the disease, suggesting that the RANKL they produce may significantly contribute to bone damage.

"We know that depleting B cells in RA patients helps preserve healthy joints and eases pain, but the potential downside is the loss of protective immunity these cells provide," said Dr. Anolik. "Our aim is to identify the specific B cell subsets and molecular pathways involved in the cells’ harmful effects so that we can begin to find ways to selectively target them. The ultimate goal is to develop new treatments with fewer unwanted side effects."