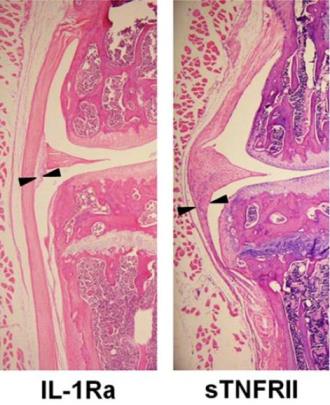 Injecting an inflammation-blocking medication into a joint area immediately following an injury prevents the onset of post-traumatic osteoarthritis (PTOA) in mice and may lead to new treatments for patients, according to a study funded in part by the NIH’s National Institute of Arthritis and Musculoskeletal and Skin Diseases (NIAMS). The study was published in the journal Arthritis Research & Therapy.

It is common for people to experience joint deterioration after a bone fracture, or ligament or meniscal tear. Some go on to develop PTOA, but the progression over time is not well understood. Moreover, it is unclear why some patients develop PTOA and others do not. However, scientists do know that elevated levels of the pro-inflammatory mediators interleukin 1 (IL-1) and tumor necrosis factor alpha (TNF-α) typically are found in patients immediately following injury, and they tend to remain high for long periods—from weeks to months—afterwards.

“We hoped that by identifying biomarkers and better characterizing the degenerative joint changes that tend to occur after injury, we could gain insight into the early stages of PTOA,” said author Farshid Guilak, Ph.D., of Duke University.

To determine how IL-1 and TNF-α are linked to PTOA, the researchers looked at both the initial and the long-term inflammation that occurs following an injury, and examined how two different biologic medications work in response to the inflammation. In one group of mice with a fractured joint, they injected the IL-1-blocking medication anakinra directly into the damaged joint area immediately following injury. In another group of mice with the same injury, they injected etanercept, an agent that blocks TNF-α activation, directly into the joint area. In two other groups of mice, they administered each medication by transfusion (systemically) for four weeks post injury. They then compared the progression and severity of PTOA in each of the groups of mice.

The mice that received an injection of anakinra into the joint immediately following injury showed significantly less inflammation and cartilage deterioration, strongly implicating IL-1 in the initial inflammatory phase. The group that was injected with etanercept showed a moderate reduction in inflammation, but the drug did not provide a benefit over the long term, and in fact was associated with evidence of deficient healing. Systemic administration of either drug showed no significant benefits in the short or long term.

The results suggest that IL-1, rather than TNF-α, plays a critical role in the early inflammation following a joint injury, and blocking it with an injection directly into the joint could encourage healing and reduce the chances for later developing PTOA.

“The study has furthered our understanding of the biological mechanisms underlying PTOA, and provides evidence in support of a novel treatment method that could be used in conjunction with other options, such as surgery,” concluded Guilak.