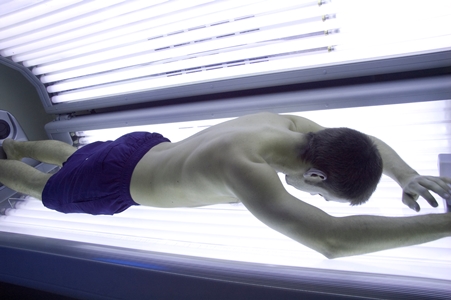 Prolonged ultraviolet (UV) light exposure results in an increase of a substance known as β-endorphin, a chemical produced by the body that reduces sensitivity to pain and is associated with addiction, according to a study conducted in mice and funded in part by the National Institute of Arthritis and Musculoskeletal and Skin Diseases (NIAMS). The study was published in the journal Cell.

UV light exposure from the sun and from tanning beds is a major risk factor for skin cancer in humans. Previous studies have suggested that excessive UV-seeking behavior is a form of addiction, but the molecular basis of the addiction has been unclear. David Fisher, M.D., Ph.D., from Massachusetts General Hospital, and colleagues, investigated the effects of UV light in mice, to determine whether UV light stimulated changes in β-endorphin levels sufficient to result in addictive behaviors and dependence, similar to the response elicited by other opioids such as morphine.

“β-endorphin is the most abundant endogenous [produced by the body] opioid, and plays a role in the reinforcement and reward circuits that underlie addiction. In addition, when administered intravenously, it has been shown to be an effective painkiller,” explained Dr. Fisher. “We wanted to better understand how it contributes specifically to excessive tanning behaviors.”

In the study, shaved mice were exposed to chronic UV light every day for six weeks. Elevated blood β-endorphin levels were detected in the mice after just one week, and levels remained high throughout the six-week period. The researchers then administered tests to assess pain sensitivity in the mice. Their pain threshold rose at a rate that paralleled that of the UV-induced increase in β-endorphin levels in blood. When the mice were treated with naloxone, a drug used to treat addiction by blocking opioid effects, the UV-induced increases in pain threshold were suppressed. These naloxone-treated mice also showed classic signs of opioid withdrawal, like paw tremor and teeth chattering.

In contrast, control mice that were subjected to non-UV light (mock treatment) showed no significant changes in β-endorphin levels, and no significant increase in pain threshold. The investigators then administered the same UV treatment to mice that were engineered to lack β-endorphin. These mice showed none of the addiction-related symptoms as the UV-treated normal mice.

“Our study provides crucial evidence that exposure to chronic UV produces endogenous opioid dependence,” said Dr. Fisher. “The next step is to pinpoint the brain region or regions of β-endorphin action, and then use this information to identify potential therapeutic targets for treating tanning addiction.”

This work was supported in part by NIAMS (grant number R01AR043369) and the National Cancer Institute (grant numbers R01CA150226 and P01CA163222). The research was also supported by the Melanoma Research Alliance, the US-Israel Binational Science Foundation, and the Dr. Miriam and Sheldon G. Adelson Research Foundation.