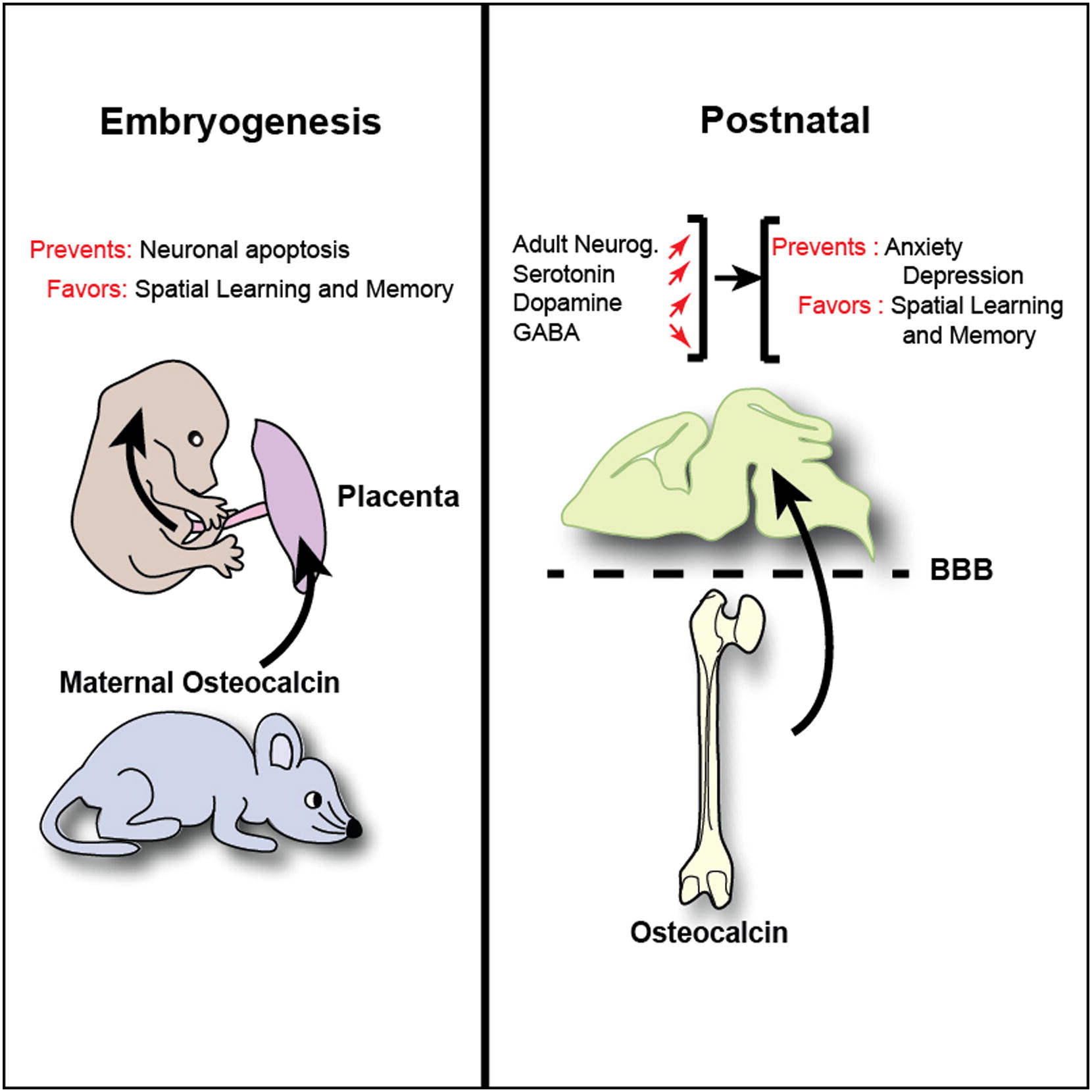 A hormone produced in bone influences pre-natal brain development and cognitive function in mice, according to research funded in part by the NIH’s National Institute of Arthritis and Musculoskeletal and Skin Diseases (NIAMS). The study was published in the journal Cell.

Bone communicates with other tissues and organs in various ways. For instance, it is known that the bone-derived hormone osteocalcin regulates insulin production and male fertility. In addition, bone receives signals from the central nervous system, likely through the network of nerves that runs throughout bone’s cellular matrix. In fact, researchers led by Gerard Karsenty, M.D., Ph.D., of Columbia University, found in an earlier study that the brain sends signals to bones that inhibit the build-up of bone mass. This discovery led the researchers to question if and how bone may communicate with the brain in response.

“The notion that bone may send signals to the brain—as opposed to just receiving them—presents an intriguing new way of thinking about the function of the skeleton,” said Dr. Karsenty.

Osteocalcin first captured the researchers’ attention as a possible candidate for bone-to-brain signaling because mice engineered to lack osteocalcin were unusually passive and showed signs of anxiety. Studying this phenotype led to the discovery that the levels of certain neurotransmitters were altered in the brains of osteocalcin-deficient mice in ways that were consistent with the behavior changes.

The investigators conducted a series of experiments to further clarify the relationship between osteocalcin and brain development. They first showed that osteocalcin could cross the blood-brain barrier—the filtering system that prevents many substances in the blood from entering the brain—and it accumulated in certain parts of the brain, including the hippocampus, which is the brain structure responsible for learning and memory. They also observed increased levels of several neurotransmitters, including serotonin, dopamine and norepinephrine. When the hormone was injected directly into the brains of osteocalcin-deficient mice, the behavior traits and lower neurotransmitter levels were corrected. Osteocalcin-deficient mice appeared to have smaller than usual hippocampi as well, further suggesting that osteocalcin plays a role in brain development.

“We need additional research to better understand how osteocalcin functions in the brain on molecular and genetic levels,” said Dr. Karsenty. “Although we cannot necessarily infer that what we see in mice also holds true in humans, our results do raise some important questions about potential links between declining cognitive function in old age and a decrease in bone mass and osteocalcin synthesis,” he concluded.