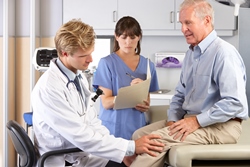 Vitamin D supplements likely do not improve symptoms of knee osteoarthritis (OA), according to results from a clinical trial recently published in the Journal of the American Medical Association (JAMA). The study, which was partially funded by the National Institute of Arthritis and Musculoskeletal and Skin Diseases of the NIH, does not support observational data suggesting that raising people’s blood levels of vitamin D may ease OA pain and joint degeneration. OA is the most common form of arthritis, affecting nearly 27 million Americans age 25 and older.

OA occurs when cartilage—the tough, flexible tissue that helps to connect bones—begins to break down and wear away in the areas where bones meet to form joints. When cartilage is lost, bones rub against each other, causing pain, swelling and loss of motion.

“Vitamin D is known to be important in building and maintaining overall bone health,” said lead study author Timothy McAlindon, M.D., M.P.H., of Tufts Medical Center. “And some epidemiological studies have suggested that people with higher than usual levels of vitamin D have slower rates of OA disease progression compared to those with lower levels. But the research has not been definitive.”

In light of the mixed epidemiological data and the known benefits of vitamin D for bone health, McAlindon and colleagues aimed to determine if giving a vitamin D supplement to patients with well-established knee OA could reduce their pain and curb the progression of cartilage loss. For two years, 146 men and women with an average age of 62 were randomized to take either a vitamin D supplement (oral cholecalciferol) or a placebo. The initial dose of vitamin D was 2,000 IU per day. Dosage levels were increased until the participants reached a serum level of more than 36 ng/ml—the point in epidemiological studies at which vitamin D appeared to have an effect on OA progression. Although treatment assignment was randomized, the group taking the vitamin D supplement had slightly worse knee pain and significantly worse knee function at the beginning of the study compared to the placebo group.

At the end of the study, neither group had experienced any significant improvement. Although both groups reported a slight decrease in knee pain, both also demonstrated about a 4 percent reduction in cartilage volume, meaning that joint deterioration continued. Neither group showed better knee function either.

The results show that vitamin D supplementation is not likely to curb the progression of OA, at least not among patients with advanced disease, according to the researchers. McAlindon and colleagues suggest that the study may have been too short in duration to see any significant improvement, and that small, incremental benefits may occur over a longer period of time. Additionally, vitamin D supplements may help people with less advanced disease, but more research is needed to determine this, the researchers concluded.