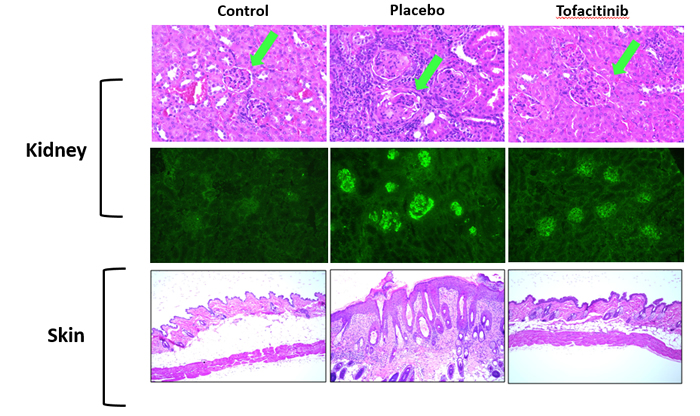 Lupus can cause inflammation in the kidneys and the skin. In this image, tissues obtained from control mice (those without disease) are compared to tissues obtained from lupus-prone mice that only received a placebo and those that received tofacitinib. In the top panel, arrows point to kidney glomeruli, which are cells that carry out the filtering action in the kidney. The infiltration of leukocyt
Credit Yasuko Furumoto, Ph.D., of the NIAMS Translational Immunity Section

A drug that effectively treats rheumatoid arthritis (RA) and can improve symptoms in other autoimmune diseases may also control the symptoms associated with systemic lupus erythematosus (SLE or lupus) and potentially slow the disease’s progression, according to a study in mice conducted by researchers at the National Institute of Arthritis and Musculoskeletal and Skin Diseases (NIAMS) and published in the journal Arthritis and Rheumatology. The NIAMS investigators partnered with colleagues from the National Institutes of Health’s (NIH’s) National Heart, Lung and Blood Institute, and the NIH’s Office of the Director.

Lupus is a chronic, autoimmune disease in which the immune system mistakenly attacks its own tissues and organs, causing widespread inflammation, as well as cardiovascular and kidney damage. In lupus, periods of remission alternate with relapses or flares. Molecules called cytokines, which signal the immune system to act, and a specific type of cytokine called interferons, are elevated in lupus patients. Interferons activate an immune response known as the JAK-STAT pathway, and are thought to play a role in the progression of the disease. The drug tofacitinib, which is approved to treat RA but had not previously been studied in lupus, blocks the JAK-STAT pathway.

Building on earlier NIAMS work involving tofacitinib, investigators led by Massimo Gadina, Ph.D., chief of the NIAMS Intramural Research Program’s (IRP’s) Translational Immunology Section, and colleagues, examined the effects of the drug on lupus-prone mice. One group of mice already had symptoms of the disease, and were given the drug twice a day over the course of six weeks. Another group of mice had not yet developed symptoms, and were treated with the drug daily over eight weeks.

The results suggested that inhibiting the JAK-STAT pathway could be a promising therapy for lupus. In the mice that had already developed the condition, the researchers found that many symptoms were reversed, including kidney disease, skin inflammation, and blood vessel damage. In the mice that had not yet developed symptoms, the drug appeared to prevent the onset of disease entirely.

Subsequent studies will determine if tofacitinib can safely control lupus symptoms in humans, and potentially prevent flares for those at high risk.

This research was supported by the NIAMS IRP (ZICAR041181-07 and ZIAAR041199 to Massimo Gadina) and by a Cooperative Research and Development Agreement (CRADA) with Pfizer, Inc.