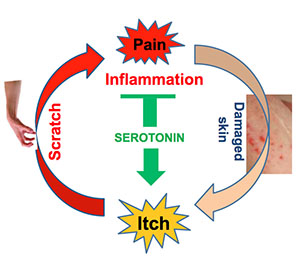 Scratching an itch brings short-lived relief but often makes the itching worse in the long-term. Now, a team of investigators led by Zhou-Feng Chen, Ph.D., director of the Center for the Study of Itch at the Washington University in St. Louis School of Medicine, has uncovered an explanation. The researchers found that serotonin, a molecule released by the brain in response to pain, such as the mild soreness caused by scratching, intensifies itch in mice. The report was published online October 30, 2014, in the journal Neuron.

Serotonin’s newly discovered role in itch suggested that deactivating the molecule could be an effective way to soothe the uncomfortable feeling. However, the body needs serotonin for many important functions, such as pain relief, bone metabolism, growth and sleep. A better strategy would be to block only its effects on itch by targeting serotonin receptors on itch-transmitting nerve cells.

To identify the receptor, Dr. Chen’s team injected mice with an itch-inducing protein called GRP, along with compounds that activate various receptors on nerve cells. Using this technique, they found that a serotonin receptor called 5-HT1A was responsible for strengthening the itch sensation. When the researchers blocked 5-HT1A in mice, the mice scratched less in response to GRP, further implicating the receptor in transmitting itch.

The approach has not yet been tested in people, but these results suggest that blocking the 5-HT1A receptor could be an effective strategy for treating the often-debilitating itch that characterizes chronic conditions like psoriasis and eczema.