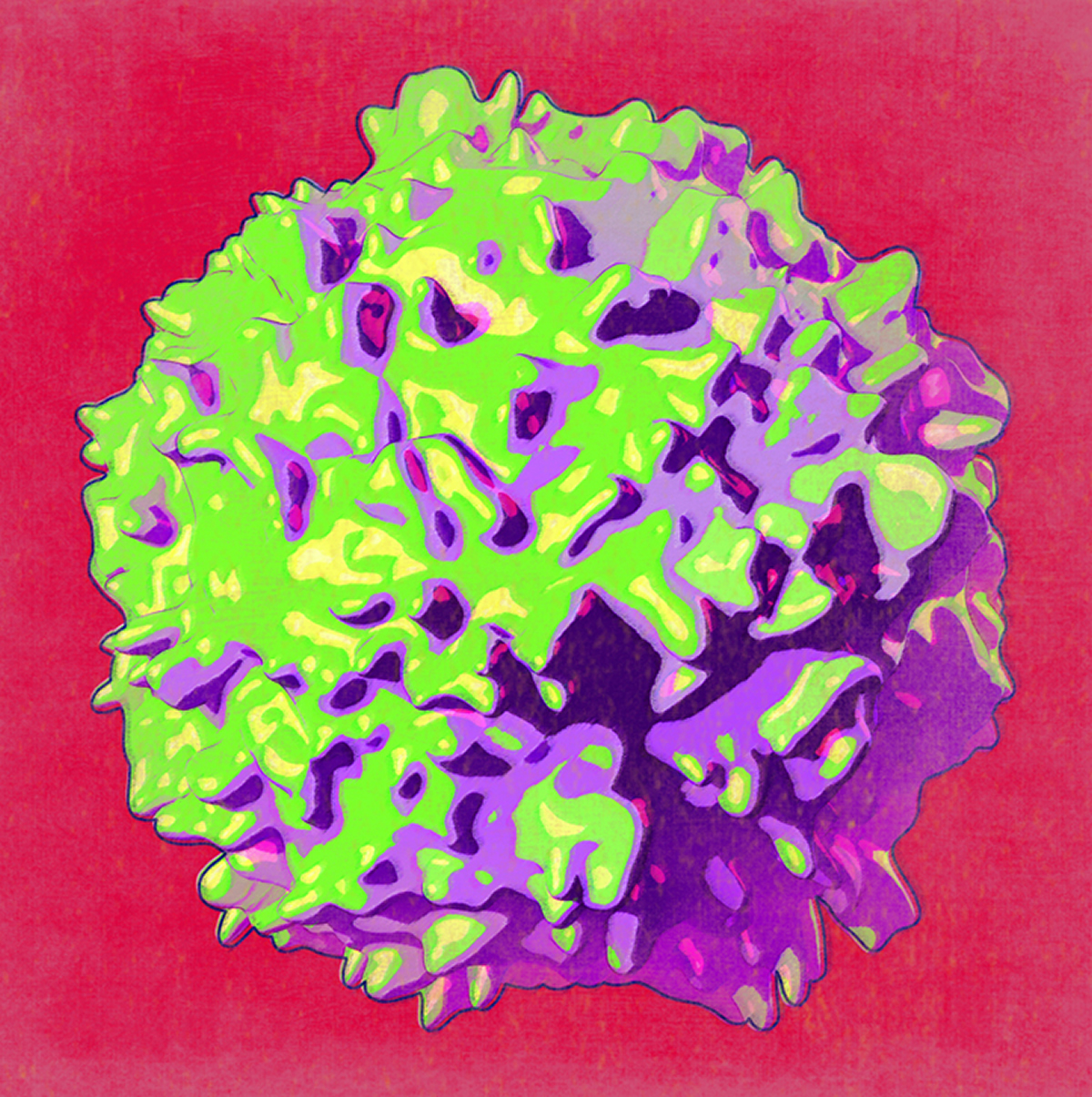 Researchers at the National Institute of Arthritis and Musculoskeletal and Skin Diseases (NIAMS) have discovered that innate lymphoid cells, early responders of the immune system, are primed at the DNA level for rapid action.
Credit Han-Yu Shih and John O’Shea, NIAMS, Alan Hoofring, NIH Division of Medical Arts

Through the use of powerful genomic techniques, researchers at the National Institute of Arthritis and Musculoskeletal and Skin Diseases (NIAMS) have found that the development of immune cells, called innate lymphoid cells (ILCs), gradually prepares these cells for rapid response to infection. This work, which appeared online today in Cell, sheds light on the development and function of a cell type that is increasingly recognized as having an important role in the body’s immune defense. NIAMS is part of the National Institutes of Health.

"Up until now, researchers have focused on T cells—another type of immune cell," said John J. O’Shea, M.D., scientific director of NIAMS and senior author of the paper. "ILCs are coming into the spotlight because they appear to have a critical role in defending the body’s barrier regions, such as the skin, lungs, and gut, where microbes must first pass to make their way into the body."

Our immune system has two arms — innate and adaptive. ILCs are innate immune cells that respond quickly against pathogens at the first site of invasion. They release small molecules called cytokines that transmit signals to fight infection.

The adaptive immune response kicks in more slowly to build an army of cells that can target specific offending pathogens. T cells, especially helper T cells, are a key part of the adaptive immune system. They produce different cytokines depending upon the type of pathogen they are trying to combat.

The importance of T cells became apparent during the 1980’s with the emergence of HIV and AIDS. HIV attacks a certain class of T cells, destroying a person’s immune defenses and leaving him or her susceptible to infection and cancer. Since that time, investigators around the world have identified the distinct functions of T cell subclasses, providing new insights into their roles in host defense and opportunities for novel therapeutic strategies.

ILCs have received less attention despite their critical role in mounting the innate immune response. Recent work has revealed that ILCs and T cells mirror each other in their subclasses, which are defined by the kinds of cytokines they produce. However, the relationships between the two types of cells have been unclear.

To determine what sets ILCs apart from T cells, Dr. O’Shea’s team looked to the foundation of a cell’s identity — its genetic information, which provides detailed instructions for how a cell functions. Part of what makes each cell type unique is its distinctive pattern of DNA structure and regulatory factors. The combination of a stretch of DNA and a set of regulatory factors can be thought of as a switch — it helps determine whether a gene is turned off (inactive) or on (active).

Inactive regions of DNA are twisted into tight coils, whereas active regions are open and accessible to the cellular machinery that reads the genetic information. The open portions of the genome include genes themselves, as well as many regions that contribute to the regulation of their activities (the switches). The areas of the genome and the factors that control whether or not the information is read, in total, are referred to as the cell’s regulome.

Working in mice, the researchers analyzed regions of the genome that control the cytokine genes produced by both ILCs and T cells. They found that each subclass of ILCs is associated with a distinct pattern of accessible regions. These patterns can be viewed as a type of barcode for each subclass. Further experiments showed that ILCs acquire their barcodes in a stepwise manner over the course of cellular development.

Importantly, the analysis showed that the barcodes are in place in ILCs before they encounter infection. This open, accessible configuration surrounding the switches that control cytokine genes may be instrumental in enabling ILCs to rapidly launch an assault upon infection.

In contrast, the researchers found that many of the DNA regions controlling cytokine genes in the mice’s T cells are inaccessible and silenced prior to exposure to a pathogen. But upon infection, T cells adopted barcodes similar to those of their ILC counterparts. This result reflected earlier findings that ILC and T cell subclasses produce similar sets of cytokines, but also revealed differences in how the two cell types control the activities of these key immune response genes. While the regulatory landscapes of ILCs are primed for a quick defense upon infection, those of T cells are minimally prepared when the pathogen invades. Only following infection are modifications in the landscape made that enable T cells to launch their attack.

"ILCs and T cells appear very different, but in the end, the way they control key responses is amazingly similar," said Han-Yu Shih, Ph.D., a post-doctoral fellow at NIAMS and first author of the paper. "ILCs were discovered less than a decade ago, but the parallels between them and T cells will enable us to more quickly understand how they work and to develop ways to enhance or inhibit their function in treating a variety of immune and inflammatory diseases."

This work was supported by the NIAMS intramural research program under project number ZIA-AR041159. The National Institute of Allergy and Infectious Diseases and the Beltsville Human Nutrition Research Center also provided support for the study.