Letter From Dr. Stephen I. Katz: Strengthening Our Partnership With the NIAMS Coalition 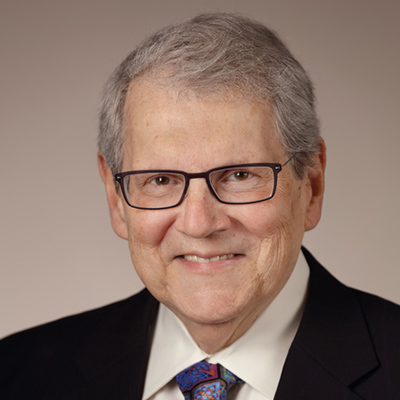 The 2017 NIAMS Coalition Outreach and Education Day marked a decade since the inaugural event. From its inception, we have worked diligently to build innovative partnerships and research programs to connect science with the public. The NIAMS Coalition is a consortium of more than 90 professional and voluntary organizations that are national in scope. These groups serve as key partners in advancing our mission, and we rely on them to help further public understanding about diseases and conditions of the bones, joints, muscles and skin. This biennial event provides a forum for our Coalition members to share best practices and receive updates from the National Institutes of Health (NIH) and the NIAMS. In October 2017, an impressive group of 55 Coalition representatives spanning 38 different organizations came together at the NIH campus.

Find Out What’s New on the Redesigned NIAMS Website 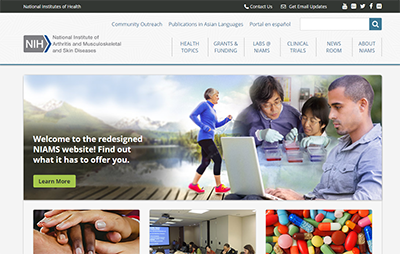 The NIAMS has launched its redesigned website. It employs a responsive design so it can be easily viewed on a phone, tablet or computer. The Health Topics in English are listed in an A-Z directory, and many topics also are available in Spanish, Chinese, Korean and Vietnamese. The Grants and Funding section features an updated searchable database, along with information on the grant application process. The Labs @ NIAMS section highlights our intramural research labs, faculty, resources and training opportunities. 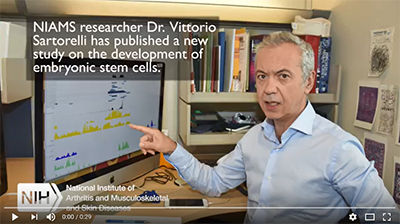 NIAMS researcher Vittorio Sartorelli, M.D., and his team have discovered that the Spt6 protein plays an important role in the development of embryonic stem cells. The findings, which appear in the journal Molecular Cell, could have implications for personalized medicine.

Image: Screenshot of Vittorio Sartorelli, M.D., from the video introducing his team's findings. 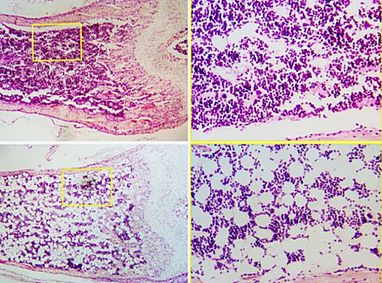 A study led by investigators from the University of Alabama, and funded in part by the NIAMS, has revealed additional details about the cellular pathways that influence the development of age-associated osteoporosis. The research explored how a certain protein influences whether bone marrow stem cells differentiate into osteoblasts—the cells that build or rebuild bone—or fat cells. Understanding these processes will inform strategies to develop new therapies to diminish age-related bone loss.

Image: A bone from a control mouse, top, compared to one from a Cbfβ-deficient mouse, bottom. The right column shows higher magnifications of the highlighted areas on the left. The Cbfβ-deficient images show reduced bone density and more white, round adipocytes.

Photo credit: University of Alabama at Birmingham, PNAS (Proceedings of the National Academy of Sciences). 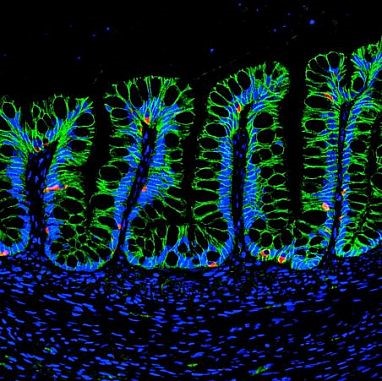 A research team funded in part by the NIAMS, the National Institute of Diabetes and Digestive and Kidney Diseases (NIDDK) and other NIH components designed an injectable hydrogel that grew intestine-like tissues and accelerated wound healing in the intestines of mice. Their findings suggest new treatment approaches for intestinal injuries caused by diseases such as inflammatory bowel disease.

Image: After transplantation into an animal, human intestinal organoids differentiate into mature intestinal tissue with specialized cell types, such as enteroendocrine cells (red).

Three scientists funded by the NIH received the 2017 Nobel Prize in Physiology or Medicine for their discoveries of molecular mechanisms controlling circadian rhythms—the internal biological clock in all living organisms that helps us adapt to the regular rhythm of the day. A fourth NIH grantee shared the 2017 Nobel Prize in Chemistry with two other scientists for the development of cryo-electron microscopy for high-resolution images of proteins, lipids and other sensitive biomolecules. 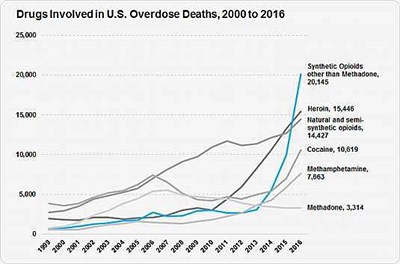 NIH Director Francis S. Collins, M.D., Ph.D., writes, “An estimated 2 million Americans are addicted to opioids, and approximately 25 million suffer daily from chronic pain. The urgency and scale of this crisis calls for innovative scientific solutions, from prevention to intervention and treatment.”

According to the CDC, one-third of adults in the most rural areas of the United States have some form of arthritis. Adults with arthritis can reduce or better manage their symptoms by participating in arthritis or chronic disease self-management education workshops such as the Chronic Disease Self-Management Program. Find out more about programs and workshops that are helping people in rural areas.

The U.S. Food and Drug Administration (FDA) has recently created a webpage describing the approval process for and offering general information on biosimilars, which are meant to be lower-cost versions of biologic treatments.

NIH's Common Fund for the Science of Behavior Change 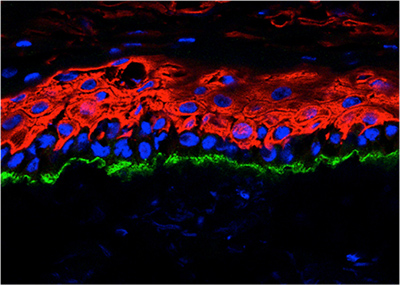 Skin generated by correcting the epidermolysis bullosa (EB) disease mutation produces normal levels of collagen VII (green) and keratin 10 (red) at the boundary between the skin’s two layers, the epidermis and the dermis. EB causes severe blistering of the skin and internal organs. This research may lead to new ways to treat it by correcting the genetic mutation.

Findings Magazine from the National Institute of General Medical Sciences (NIGMS) presents cutting-edge research from scientists in diverse biomedical fields. The articles are written with the goal of making science—and the people who do it—interesting and exciting, and to inspire young readers to pursue careers in biomedical research. Each issue offers activities such as quizzes, crossword puzzles and video interviews with scientists.

Image: This normal human skin cell was treated with a growth factor that triggered the formation of specialized protein structures that enable the cell to move. 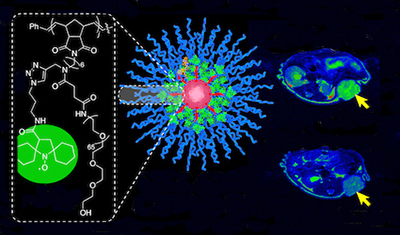 The National Institute of Biomedical Imaging and Bioengineering (NIBIB) funds research to develop and accelerate the application of biomedical technologies. Read about metal-free magnetic resonance imaging (MRI) agents and other recent research results on the NIBIB Newsroom page.

Image: Metal-free MRI agents could overcome the toxicity associated with metal-based agents in some patient populations and enable new modes of functional MRI.

We invite you to subscribe to the NIAMS Community Outreach Bulletin, which is an online digest designed to inform community advocates and health professionals about resources for diverse audiences on conditions of the bones, joints, muscles and skin and ways to stay healthy. The NIAMS also publishes the Honoring Health: Resources for American Indians and Alaska Natives e-newsletter, which is distributed three times per year and highlights a different health topic for each issue, along with helpful resources for community members and health professionals.

The NIAMS Advisory Council Meeting will be held February 7, 2018, in Building 31, 6th Floor, C Wing, Conference Room 6, NIH Campus. A meeting agenda will be posted as soon as it is available. The Council meeting will be available for live viewing via the NIH videocasting service as well. 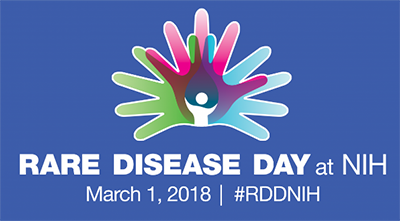 The NIH hosts a number of science seminars and events that are available online through real-time streaming video (videocast). The NIH calendar notes these videocast events with a video icon