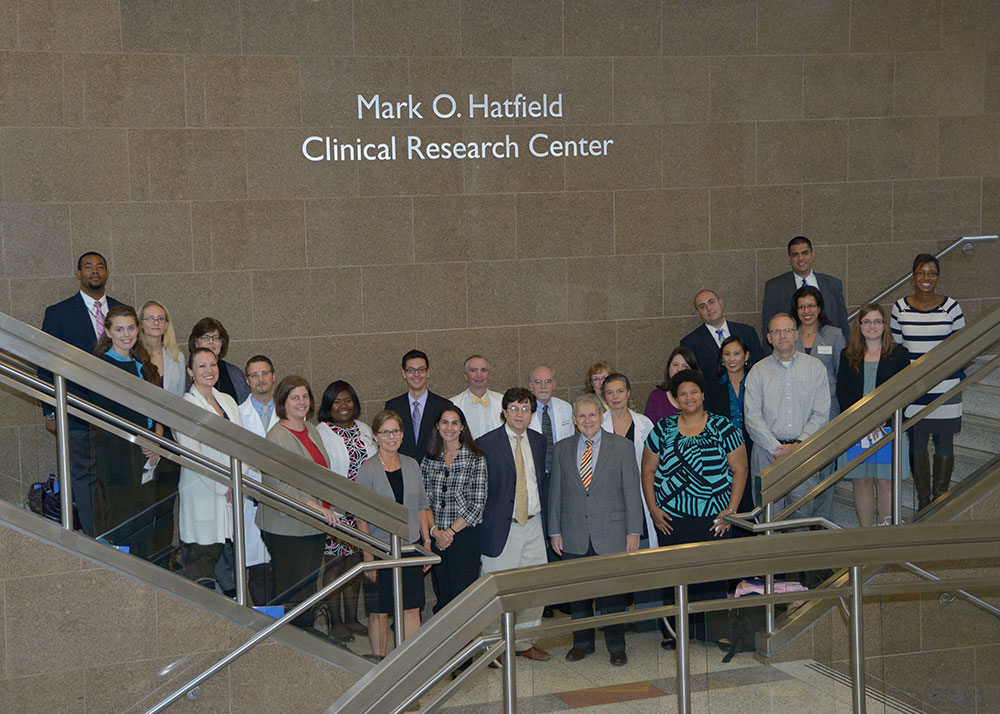 Eight senior level Congressional staffers recently toured laboratories in the Intramural Research Program (IRP) of the National Institute of Arthritis and Musculoskeletal and Skin Diseases (NIAMS). The group represented both Republicans and Democrats from the House and Senate, including members from the NIH’s authorization and appropriations committees. The visit was organized by the NIAMS Coalition, an independent group of more than 70 professional and voluntary organizations concerned with the programs of the NIAMS, to help build awareness on Capitol Hill about research advances in NIH labs that are leading to significant improvements for patients.

NIAMS leaders and scientists gave overviews of the NIH and described breakthroughs in translational research. They emphasized the possibilities for impactful discoveries, the importance of maintaining a pipeline of research scientists, and the value of partnerships among government, private industry and professional and patient groups.

"This is an exciting place to be," said Dr. Stephen I. Katz, director of the NIAMS. "There has been a deluge of discoveries, and the opportunities for translational research are unprecedented."

"The IRP at the NIH is a unique model for biomedical research that encourages visionary, high risk, high reward science," said Dr. Siegel. "There is stable research funding and a collaborative environment that enables us to do long-term and innovative studies. And, the availability of the Clinical Center and a large number of physician-scientists enables translational research."

The group was able to see another example of translational research in the lab of Dr. Raphaela Goldbach-Mansky, from the NIAMS Pediatric Translational Research Branch. She illustrated the work that she and her colleagues are conducting to characterize the genes underlying the recently discovered diseases called NOMID (neonatal-onset multisystem inflammatory disease), DIRA (deficiency of the interleukin-1 receptor antagonist) and CANDLE (chronic atypical neutrophilic dermatosis with lipodystrophy and elevated temperature). Their work has dramatically improved the lives of pediatric patients with rare autoinflammatory diseases who have disabling, and often life threatening, conditions.

Dr. Massimo Gadina, from the NIAMS Translational Immunology Section and a collaborator with Dr. Goldbach-Mansky, gave participants an up-close view of a cell sorting machine that enables him to look at DNA sequences to discover abnormalities in undiagnosed diseases. The staffers saw induced pluripotent stem (iPS) cells that had been converted to cardiac cells. There are many ways iPS cells can be used therapeutically, and they can help us understand the origins of disease, as well. Dr. Gadina explained that these discoveries in the lab translate into improving patient diagnosis and outcomes.

Scott Johnson, a staffer for Senator Daniel Inouye (D-HI), said, "The tour was fantastic. It allowed me to gain concrete knowledge about research being done at NIH that I could see with my own eyes. It will be helpful in the work that I do to support NIH."

Following the lab tours, the group visited the Clinical Movement Analysis Laboratory in the Clinical Center, a facility that captures human movement data to study a wide variety of movement disorders and diseases. Led by Dr. Diane Damiano, chief of the Functional and Applied Biomechanics section; Dr. Fran Sheehan-Gavelli, a staff scientist; Dr. Katharine Alter, a staff clinician; and Christopher Stanley, a motion lab engineer, the Congressional staffers observed demonstrations of sophisticated devices that help researchers and clinicians diagnose and analyze patients’ conditions and help them with recovery.